To explain what Japanese Akoya Keshi Pearls are, one must start by explaining what they are not:  Keshi aren’t found in large quantities and are an extremely rare form of pearl. In fact, true Japanese Keshi pearls are from the Japanese Akoya Oyster found only in the Sea of Japan. Keshi, from the Japanese word for “poppy seed”, can take seven years to form. They are created under difficult circumstances: naturally and in a controlled environment. The versatility of the Keshi pearl is due in part to the fact that they come in many shapes, hues, lusters, colors and sizes.  Keshi can range from pure white to tones of gray, blue, green, pink and yellow. One of the remarkable things about keshi is that their color and luster remains unchanged throughtime. 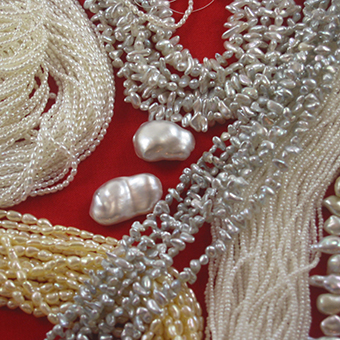 Pearls have been found in jewelry dating back to  at 100 BC and long beyond.    The largest pearl known was found in the Philippines in 1934 in  a giant clam. The pearl weighs 14 lb and was discovered by an anonymous Filipino Muslim diver off the island of Palawan. According to the legend, a Palawan chieftain gave the pearl to Wilbur Dowell Cobb in 1936 because he had saved his sons life. The pearl had been named the “Pearl of Allah” by the Muslim tribal chief, because it resembled a turbaned head and now officially named the Pearl of Lao-tze. It is estimated to be valued at 40 million dollars. Contrast this to a keshi pearl which can be as small as 0.5 or 0.6 mm with a whole size of  0.2 or 0.3 mm for stringing.

India and many Middle Eastern countries have a long history with pearls. More than 500 years ago, keshi pearls were very popular among the Maharajahs of India and with the princesses of the  Arabian kingdoms. Found in their surrounding seas, these “gifts of the mermaids,” as they were known, were worn with pride and associated with royalty. Before Kokichi Mikimoto made a name for himself in the culturing process in the early 1900’s, natural pearls were  rare and expensive and were only affordable by the rich and famous. Mikimoto changed the industry. His remarkable efforts in marketing cultured pearls have created an industry where there was previously none, and made pearls easily available to all.  Indian merchants sourced  keshi pearls in Japan, and since then, have been importing these pearls from the Orient. So started the history of Japanese Akoya keshi, which are a byproduct of the culturing process. Over the last 40 years, Japan has slowly become the biggest buyer of keshi pearls. As more people discover them, the demand worldwide is continually increasing for this unique gift of the mermaids. What is a Keshi Pearl?

Because of the culturing process, natural pearl lovers – particularly in India & the Middle East – prefer non-cultured pearls. Japanese Akoya saltwater keshi are the closet to a natural seawater pearl that one can obtain. To explain what Japanese Akoya saltwater keshi pearls are, one must start by explaining what they are not:  Keshi are not found in large quantities but are an extremely rare form of pearl, and are not freshwater pearls.  On the other hand keshi are seawater pearls and are found in quantities from 1% to half of 1% of the total Japanese Akoya cultured pearl production Japanese keshi pearls can range  from 0.6 mm to 7 mm (very rare). As for the south sea and black pearl keshi  can occur in much larger sizes. The smaller Japanese Akoya keshi are the original keshi pearls that gave the industry its name. In fact, keshi are precious because they are the most difficult to find of all pearls. Japanese Akoya keshi can take up to a few years to form, although less than a year for smaller sizes are typical. Keshi are formed in a controlled environment and come in many shapes, hues, luster’s, colors and sizes and can range from pure white to  gray with tones of, blue, green, pink and yellow.

Keshi pearls, can be formed in a couple of different ways. One way a keshi can form occurs when the oyster rejects the beaded nucleus  and an irritant makes its way inside the oyster. Layers of nacre are secreted over this irritant and a keshi is formed.   Also what can occur is that the implanted tissue fractures and forms separate sacs, which in turn can form a keshi. Again it is important to note that the Japanese Akoya keshi is a by-product of the culturing process, but the keshi itself is 100 % nacre unlike other cultured pearls, which contain a beaded nucleus.

Keshi pearls come in a variety of different colors and shades, and are known for their luster and uncommon orient. This is a result of their composition consisting of solid nacre. Since these pearls are formed without a nucleus, shapes tend to come more baroque, with round being very rare. Other shapes include rice, oval, flat, and semi-round. The round keshi pearls are so rare that they are sold by the carat or momme. (1 momme (m) = 3.75 g = 18.75 cts)  Normally you may see 0.01 percent of all keshi production perfectly round, so these type of strands are quite rare indeed. A few strands of round akoya keshi pearls  with matching color may take 10 years to collect.